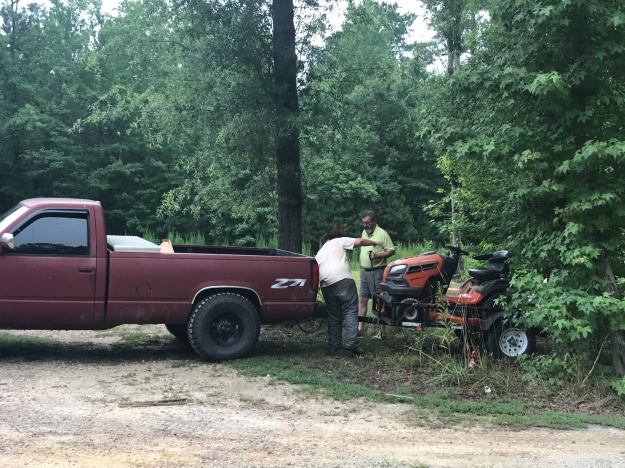 In typical man speak, Chase came in earlier in the week and asked Preston,  “Are we good for Saturday?”.  Preston didn’t even look up from his iPad as he quietly and simply nodded his head.

Then this morning, Preston got a text that said  “I’m on the way”.  Preston jumps up out of bed and gets ready.   Sounds like some covert, undercover mission, right?   It’s a mission all right.  One that we are all called to do.

It all started last summer.

A fellow texted me last August and said I need to ask you something.  He explained that he was giving up the farm life and moving his family to another community.  He had a lawnmower that he wanted Preston to have.  There was one condition, we could never reveal his identity.  He had been inspired by Preston’s journey and felt that he had been blessed in his life so much, he wanted to pass the blesssing on.

What this guy didn’t know was that our own yard had been mowed for the last 2 summers by Matt, owner of a local company called “Tight  Schedule Lawn Care”(if you’re local, give him a call!!!) Matt wouldn’t let us pay him a dime and will probably have the Crow make my life painful for publicly acknowledging him.

Back to our farmer friend…. he delivers a mower to our home.  It’s not your traditional Walmart mower.  It’s a very nice one, with all kinds of bells and whistles.  It was only a few months old and had only been used for one season.  The guy even handed Preston all the papers of where he had it serviced. Preston is in shock that someone would GIVE him a gift like this.  It was a gift of so much more than 4 wheels and a blade.  It gave him some of his manhood back.  His ability to take care of his own.   What a beautiful priceless gift this guy gave my husband!

Fast forward to this season.  Chase came to Preston and shared a story with him about a friend of a friend that has been paralyzed after a automobile accident several  months ago.    Chase asked Preston if he would be willing to try to go over and with his help, cut this guy’s grass.

Something beautiful happened that day.

Preston felt needed and Chase believed in him. They packed up the equipment and headed over to the guy’s house for what I assumed would be a one time thing.  Nope, they do it every few weeks now.   Granted, Preston is limited in what he can do but he can ride that mower around while Chase does all the manual labor. What makes it more special is that to my understanding, they’ve never talked to family.  That’s not important.

Feeling cared for, feeling loved, and sharing that love of God is what’s important.

This story is about a young boy who believed in his daddy, when the world saw him with nothing left to give.  It’s a story about a businesss owner that doesn’t have a greedy bone in his body and cares for his brother in Christ.  It’s a story about a decorated military hero veteran that not only “gave” to his country but gave his brother a little of his manhood back.  It’s about another brother that is in the trial of his life.

This is the Brotherhood that I think God speaks of in the Bible when he refers to iron sharpening iron.

1 thought on “The Lawnmower”