Several blogs ago, I shared the story of my hearing loss and how Preston was in the process of learning very basic sign language.  Much of it was signs that probably only the two of us understood. I had gotten in the habit of asking yes or no questions and he would give me thumbs up or thumbs down. He had also learned how to tell me that he loved me.

The good Lord knew exactly what he was doing.

The night of Preston’s brain aneurysm,  I’ll never forget the image of finding him in the bathroom.  As sick as he was, and unable to speak, he kept signing over and over how he wanted me to know that he loved me. After rushing him to the local hospital, and being intubated, and getting ready to be flown to a trauma center, he kept doing that universal symbol of love over and over.

The doctors couldn’t believe that he was even conscious and communicating.  Looking back, I know that God kept him alert, fighting for his life and family and gave me that sweet time to prepare for the nightmare that lay ahead.

Preston miraculously survived.  A chain of events happened that literally flipped our worlds upside down.   Preston was in the fight of his life.  He was in a coma. For nearly 2 months.

During that two months, I can only say God was in control. I’ve never known God like I knew him then.  Not even now.  To this day, I seek that. And have yet to find it again.

Preston grew sicker and sicker as the days went.  So sick, that I recall them keeping the heart shocker thing by his bed with the wires and pads already attached.   The alarms were non stop it seemed. He literally was hooked up to so many machines that when the doctors came in to examine him, I’d have to open his door and stand in the hallway. There was no room.

Day in and day out, I would sit by his bed and rub his limp hand. Begging him to respond. Nothing.  For weeks I did this.  Nothing.  I remember his team of neurologists, coming in day after day.  They would scrap stab his feet with sharp objects and grab his eye sockets.  No response. Nothing.  After several weeks of this, one day they didn’t show up.  The nurse told me that there was nothing the neurologists could do. Preston was not responding.  I demanded that they come see him on their daily rounds.  They agreed.  I ran off the chaplain that they kept trying to send in the room. We all know what that was about.  I continued my bedside vigil, rubbing that hand and thumb…. still begging him to respond with a thumbs up if he could hear me.  Nothing.

The neurologists did continue those rounds for a few more weeks. But never a response.  I remember one pulling me out into the hallway and telling me that I needed to “prepare” myself that Preston may not make it and if he did, he may never come out of the coma.  They  would not be back to check on him again.

That day, my faith was tested.  I had a sick husband that everyone was saying would not make it.  He was not responding in any kind of way.  My pastor and his wife happened to show up about the time I had just finished that conversation with the neurologist.  I was at the lowest I had ever been during this whole trial.  I was ready to give up. My pastor and his wife had some stern words for me and some much needed encouragement.  Later that evening, I was downstairs in the hospital lobby sitting in Panera Bread.  God spoke to me.

God told me that I had a decision to make.  I could either plan Preston’s funeral or I could trust Him.  I chose my sweet, sweet Father.  His word said he would never forsake me. I believed that.

With renewed strength, I rubbed Preston’s hand a little more.  I begged him to respond. Day in and day out.  One day, Preston squeezed my hand. Nothing but a hand squeeze.  A few days later, he squeezed again.  The doctors said it wasn’t happening. It was muscle spasms.  I knew better.  I kept rubbing and praying. A few days later, I asked him lift his thumb if he could hear me.  He couldn’t  lift it, but it definitely moved.  We did this for days.  Every day, that thumb got stronger and he’d respond.  He wouldn’t do it for the nurses or anyone else.  Just me, his sunshine.  That was when I realized the depth of how much my husband loved me.

Eventually, the nurses caught on and would have me ask him questions.  The thumb would come up! The nurses knew that he was able to respond. We called the neurology team back again. And again, he would not respond to the traditional feet, reflex and eye socket tests.  I grabbed Preston and told him that if he could hear me that he needed to give me a Thumbs DOWN right at that moment!  And he did!!!  All glory to God.

One night, several weeks later, as I was telling a friend “bye”, and looked at him…. those eyes opened for the first time and he was like a deer in headlights!  Preston was awake. It was a miracle.  We will talk about that day in another blog.

We continued to communicate through those thumbs.  He could not verbally communicate becuase of all the tubes, but we, with God, figured out a way.

I have attached several pictures. Pay attention to those thumbs. 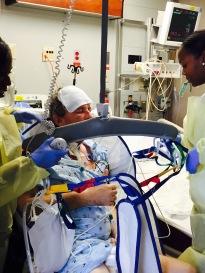